Arran ist a beautiful island on the west coast of Scotland. It’s a 2-hour-drive from Edinburgh to get to the ferry, and around an hour on the ferry to actually get to the island. Or, to put it another way, Scotland is a quite small country and it’s easy to get from one side to the other. And I was lucky enough to have a lovely group of people to go there with. 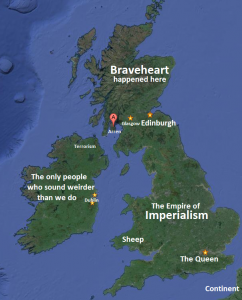 Having brought lots and lots of food, we planned on staying at a camping site near Brodick. When we got to the island, it was pouring and some of us were sceptical already whether we would really make it into our tents properly dry. After a bit of an excursion we built up the first tent, and when it turned out to be „completely soaked“, we gave up and David managed to find a bunkhouse that had a room for ten people to stay in. (Summarizing this in three sentences feels so weird, since the actual process of finding the camping site – finding the site facilities on the gigantic camping site – building up a tent – tearing apart a tent – driving back – getting lost in the middle of all the fog – driving to the bunkhouse took at least 2 hours, probably significantly more). Anyway, we got there, it was nice and lovely and it had hot showers and heating and a sofa – all was fine again. The evening passed away with onesies, drinks, werewulves, missing people, barefoot walks through the pouring rain, excursions to the beach, and cookies, and turned out to be quite a bit too much for a few people, who subsequently decided not to join us for hiking the next day.

So, about Hiking. Arran is on the west coast of Scotland, as I said before, and the west coast is somewhat different from the east in terms of weather. Having had quite severe rainfall all through the night, the next morning saw us (or did not) leave through thick fog for the Arran Castle, from where Kyle, our guide and pro-hiker, had planned to start the climb. After a few kilometers, we already got high enough to give us an idea of today’s conditions. Kyle, who sped away in front of us amazed amateurs, disappeared more and more often in the grey soupy environment, and after about two hours of straight walking without seeing where or how high we were on either side, we found ourselves to be on the top.

And there we were. It’s not like we had an amazing view or anything – we couldn’t see shit, but that also had a certain feel to it. But still, on a clear day (if there ever is one), I would imagine this to be so much more of an amazing thing to do. Anyhow, we went on and on over a few more quite stoney tops and went down a saddle, where we encountered our first proper Arran deer, who couldn’t really be bothered by our presence – if they even saw us in the gray puddle.

It was already late afternoon by then, and as the days have grown a lot shorter in Scotland by now, it was to be dark around six and we had quite a way to go. We decided to take the shortcut through the glen and climbed down and underneath the foggy clouds, and suddenly, we had an amazing view of the valley, drawn in all kinds of autumn reds. From both sides of the valley, mountain streams were pouring down fresh water – of the most delicious I ever tried – and we had an amazing walk by the river they formed under the thick and darkening sky. Finally, we ended up back at the camping site from the day before, gave the guys a call and got picked up quite exhausted (except for Kyle, naturally), but happy.

After another long and great evening together, we left the house early in the morning and headed back to the ferry. So what’s to say about Arran? If the weather is nice, camping there ought to be awesome. If not, find a hostel. Definitely go for a hike. Look out for squirrel crossing road signs. Make sure you bring an umbrella. Take along a camera and a bunch of really cool people. Put them in giraffe, fox and zebra-dragon onesies. Bring a sufficient amount of perry, rum and cookies. Don’t expect your phone to ever work anywhere at all. Take the weather as it is, and don’t forget to try some cheese. You will have an amazing time!